In the last decade of the 1800s when places like Cascade Park were opening in towns and cities all over the United States, the focus was different than today’s amusement parks. Then, people traveled to parks to relax and escape the pressures of daily life. Dressed in their best attire, they would pack a picnic basket, hop on a trolley headed to the park, and enjoy the summer day. In the city of New Castle, Pennsylvania, Cascade Park, was the area’s concept of just that.

Before Cascade Park existed, the property was known informally as Big Run Falls. Pleasure seekers enjoyed the falls and creek, in addition to food establishments and even a Merry-Go-Round on grounds that were largely untouched and wild. The earliest mention of a Merry-Go-Round in historical accounts listed it near Washington Street in 1889.1

In 1892, Colonel Levi C Brinton, a Civil War Veteran, purchased the land for $5,000 and officially named it Brinton Park. Additions such as a dance hall and a few primitive amusements made a trip to Cascade Park irresistible.

Brinton understood the importance of easy access to his park for the then burgeoning New Castle population and construction began on tracks connecting the park with an interurban railway.  Troubles where publicized when the Pennsylvania General Electric Company sued Brinton and his Brinton Park Electric Street Railway Company due to unpaid bills in access of $1717.15 for materials furnished for the construction of the line5. Brinton promised his new street car would be completed no later than June 15th, 1894 to connect downtown New Castle, to the park. Plans for the addition of a roller coaster were announced in 18943.

Brinton faced unforeseen hardship when, in December, he was forced to remove the trolley tracks at his own expense due to his failure to obtain permission from the New Castle Electric Street Railway Company.  Brinton continued to improve the park and added a dancing pavilion, rustic shelters, an open air theater, and by 1897, a used, steam driven, canvas top, Merry-Go-Round4.

In 1897, the New Castle Traction Company purchased the 70+ acre park for $16,000 before expanding it to 183 acres. A Boston landscape architect named Frank M. Blaisdell2, was hired in 1898  to redesign the park in a way that enhanced its natural beauty.  In Blaisdell’s plan, flower beds were added, and the area along the falls, streams, and a large stone cliff at the southern end of the property, known as the Cat Rocks were accentuated.  The southernmost portion of the property was flooded and converted into a lake with the damming of the Big Run.

A contest was held to see who could come up with the best new name for the new park. A ten year old girl by the name of Edwina Norris won $10.00 for the name as we know it- “Cascade Park.” 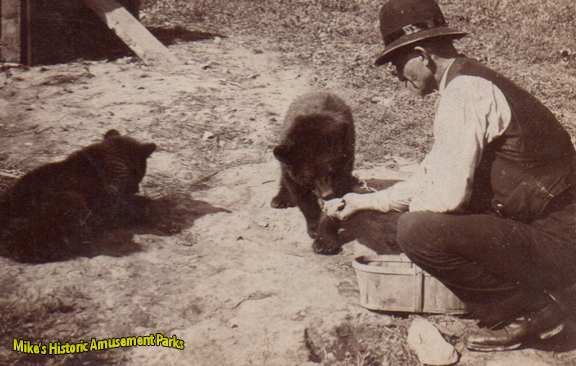 A zoological garden was constructed on a bluff just south of the waterfalls. The buildings that housed the animals were stylish in construction, sporting some Victorian details.

By 1900, Cascade’s first Roller Coaster (or Toboggan as it was commonly called then) was built and it was one ofabout a dozen rides the park had to offer that first decade.

In June of 1909, an Old Mill attraction was installed. The Old Mill featured wooden boats that slowly traversed darkened channels, past paper mache props and scenes.

As for entertainment, the park offered vaudeville acts in an open air amphitheater and bands in both a gazebo and the large Dance Pavilion which is still in use today. This huge, Victorian dance pavilion was once boasted as the largest in Pennsylvania. During the pavilion’s golden days, performers such as Paul Whitman, Vaughn Monroe, and Danny Thomas performed there. The pavilion manager once suggested to an orchestra’s piano player, that he would succeed in Hollywood. Henry Mancini, the musician did in fact, go to Hollywood. 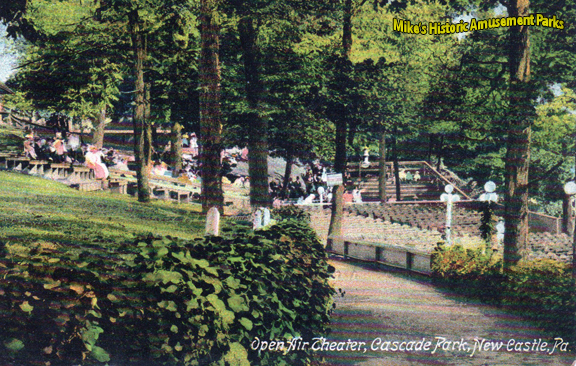 At the open air theater, just below the pavilion, park patrons could sit on the rocks for free, or pay 10 cents for a reserved seats.

Billy Glenn, most remembered for his popcorn wagon, leased part of the park and installed rides and other attractions.

and a reported $100,000 in improvements. The addition of the Gorge – a sprawling roller coaster that offered a thrilling and scenic ride that took advantage of Cascade Park’s natural topography. Early news reporting listed the ride as a Scenic Railway with a price tag of $50,0006. Operational hours beginning at 7:30am and continuing until 11:30pm. The old figure eight roller coaster was torn down and the space repurposed for expanded automobile parking7.

Also in 1922, the still-standing Carousel pavilion was built by the Philadelphia Toboggan Company to house the park’s second carousel, (model PTC #64R). This Merry-Go-Round was originally located at Idora Park in Youngstown, Ohio. Some old timers can still remember trying to catch the brass ring to win a free ride.

Glenn removed the zoological gardens to make room for a swimming pool build the pool. Although there have been some off-years for the swimming pool, there has been one at Cascade Park since Billy Glenn’s pool opened.

During the 1930’s the dance pavilion was renamed Rainbow Terrace and played host to many Big Bands.

The New Castle Traction Company was later incorporated into Penn Power/Penn Ohio, and ran the park until 1934, when it was sold to the city of New Castle for $1.00. The only stipulation was that no alcoholic beverages could be sold at the park forever.

After World War II, park attendance declined as people were becoming too sophisticated to spend a day at an amusement park. By 1941, the then decade old bus system had been fully rolled out, completely phasing out the city’s trolleys.

The park still had high attendance at this time, but not as high as its days as a trolley park.

A few concessions existed at the park during this time. The amusement park business at Cascade was in decline as amusement park production was slowed while materials were needed for the war.

By the 1950s, Paul Vesco moved in to the park and started buying out existing concessions. The Skooter (bumper car) ride was not being used at the time and his family got it up and running. Other rides were owned or leased by other concessions and Vesco kept his eyes on those until timing was right to assume them as well.

In 1955, Vesco built and opened the new Gorge roller coaster but renamed it 2 years later due to park visitors complaining that it was not the Gorge the remembered.  was responsible for adding the famous Comet coaster, which was sadly torn down in 1984. Other rides Vesco installed, included a used Tumble Bug, Ferris Wheel, Skee Ball concessions and more. He also replaced the old P.T.C. carousel by the. Allan Herschell Company that featured aluminum-constructed horses.

A fire in the late 1970s resulted in the loss of an almost 70 year old structure that housed the restaurant and arcade.  This necessitated the building of a new Arcade barn. Group picnics supported the park but that became more difficult with the gradual closing of the local mills. The opening of Moraine State park and its 3,225-acre Lake Arthur only 14 miles away, hurt attendance in the later 1970s.

During the parks last few years, Vesco’s resourcefulness was tested as he kept the park going. A used ride known as the Whip was purchased from West View Park after its 1977 closure. Disputes with the city over lease payments and a lack of maintenance to the entire park grounds ensued while Vesco poured resources into the property itself. On such cost incurred by Vesco was the raising the lake damn to allow his Mississippi riverboat-themed paddle boat to be usable in a time when the lake had taken on more layers of silt that rendered the water too shallow.

Vandals contributed to Vesco’s woes and caused damage at the park at night time, breaking neon signs and windows. One night they pushed one of the Comet trains out of the loading station causing it to valley in the track at the bottom of the ravine . One night someone stole the Merry-Go-Round horses. To top everything off, a tree fell across the tracks of the Comet in 1982, causing it to never operate again.

Vesco and the City of New Castle had several mutual disagreements over rent and insurance. He was then told to have his rides removed by March 31, 1986, or they would be bulldozed. Sadly, all the rides and some buildings were removed.

While amusements are now gone, the park has still survived. Local organizations donated countless hours to preserve what was left of Cascade Park. In the late 1970s, the 1896 dance pavilion was restored by the Paws ‘n Taws dance group. The group added a new roof and refinished the floor. Later, the City covered part of the old wooden floor with linoleum tiles that read, “Cascade Park 1896.” 1896 is the wrong year since the park opened in 1897. The old Carousel building was restored to its original condition in about 1987 or 1988 while a local architect donated his services to the restoration. The windows and laminated beams were repaired, and a new floor was constructed with historically accurate tongue and groove wood.

Other concessions were brought into the park.  About the time Vesco’s amusement rides were removed, the park still offered Miniature Golf, a trampoline attraction, Go Carts, Bumper Boats, and the same Italian Ice stand that had operated for decades.

By 1995, the bumper boats and Go Carts had been removed and their concrete pool and tracks removed. The Min Golf concession closed and was removed in the year 2000 while the swimming pool continued to operate, sometimes changing operators.

In 2017, the local United Way started volunteering and fundraising efforts to get the swimming pool reopened after almost a decade of closure and neglect.  The bath house was given a new pitched roof to replace the original decayed flat roof. Funds continued to be raised.

The park is still a beautiful place that resembles its 1897 self. The waterfalls are still an attraction. The park still offers swimming, dancing, and a nice picnic grove, just as it did back then. If the lake were ever restored, this would be a nice attraction also. The lake could provide fishing and boating as it did around the turn of the century

The park has been home to a couple-decades-old event known as “Back to the Fifties” that hosts hundreds of classic cars . Other festivities have included Thunder in the Cascades, Italian Day, and Syrian picnics, and the annual Christmas light drive thru, Cascade of Lights.